by Maracucha
in Puerta Puerta Venezuela
Comments are off for this post. 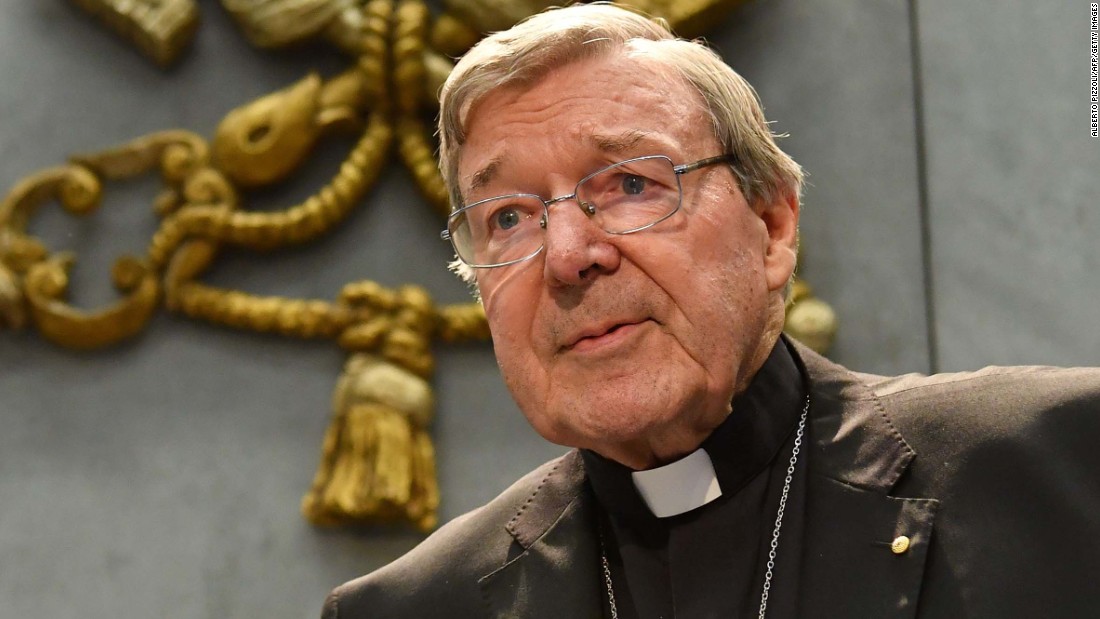 (CNN)Cardinal George Pell has a long list of achievements in the Catholic Church and in Australian society — feted by popes, prime ministers and the Queen of England.

As the son of an Anglican father and a devout Irish Catholic mother, the young Pell helped run his family hotel and pub, the Cattle Yards Inn and Royal Oak, where he served beer to tough-talking Aussies in a gold-mining town. 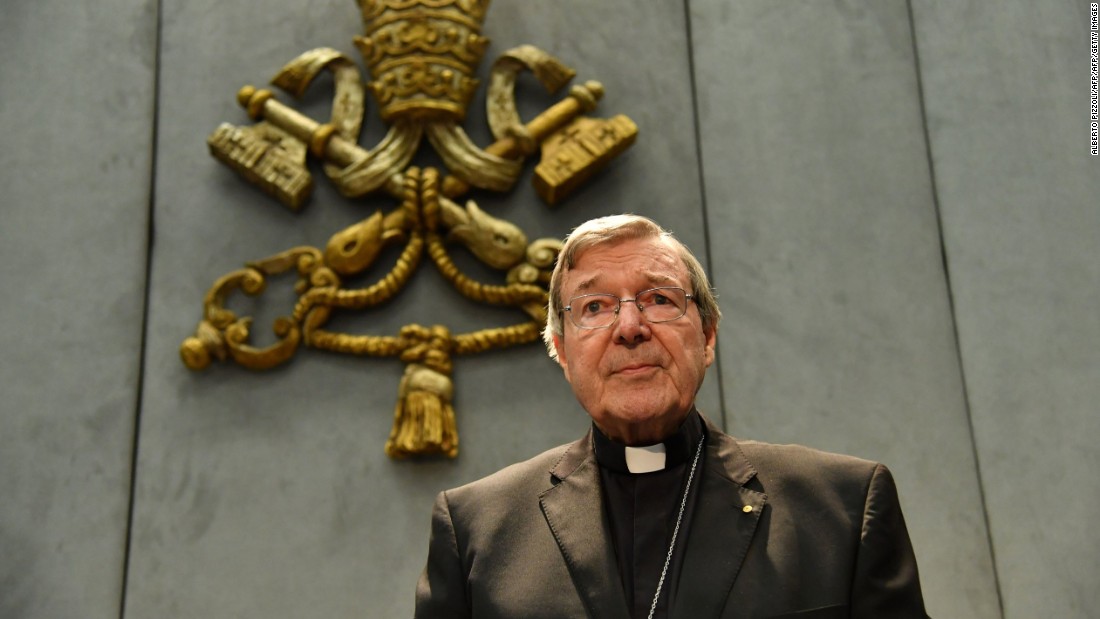 He rose from those humble beginnings in Australia to become one of Pope Francis’ top advisers, equally admired and feared in gilded Vatican halls for his forthright manner.
But now Australia’s highest-ranking Catholic has returned to his home country to face multiple charges of historical sexual assault offenses. The first hearing of that case begins Wednesday at the Magistrates’ Court of Victoria. He has vehemently denied the allegations.

‘A standout figure’ in athletics and studies

, Pope Francis named him one of eight cardinals tasked with studying reform in the Catholic Church.

Born in Ballarat, Australia, on June 8, 1941, Pell spent his early childhood in and out of the hospital undergoing operations for a recurring tumor in his neck.
Despite the illness, he excelled in sports and academics at St. Patrick’s College and in 1959, his last year of high school, signed a professional contract with the Richmond Football Club before eventually deciding to attend seminary instead.
“George always did very well at school. He was always a standout figure, partly because of his size. He was very popular,” the Rev. Michael Mason, a former schoolmate and friend of more than 50 years, told Australian news site theage.com in 2003.
The Italian press consistently call Pell a “bull in a china shop.”
Denis Hart, Pell’s successor as archbishop of Melbourne, has said the cardinal has “freshness and honesty, a regard for truth and a fearless proclaiming of it that I admire.”

Pell was ordained a Catholic priest in December 1966 and subsequently studied in Rome, Oxford and Cambridge.
He returned to Australia in 1971 and was a priest in the parish churches of Swan Hill, Ballarat East, Bungaree and Mentone for the next 26 years.
During many of those years, from 1973 to 1984, much of his work focused on Catholic education as the Episcopal vicar for education, the bishop’s representative to schools.
Pell was also a full-time academic as director of the Aquinas Teaching College and principal of the Institute of Catholic Education, now part of Australian Catholic University. His rise through the ranks of the Catholic Church’s hierarchy began with his appointment as auxiliary bishop of Melbourne in May 1987.
In 1996, Pope John Paul II made him archbishop of Melbourne, where Pell put in place one of the earliest comprehensive programs in the Catholic Church to address sex abuse accusations, called the Melbourne Response.
The program had its critics, but supporters, including the Vatican, say it shows that Pell has worked to rout out sex abuse in the Catholic Church long before scandals came to international attention.
“I not only disturbed the status quo, but when I became archbishop of Melbourne, I turned the situation right around so that the Melbourne Response procedures were light years ahead of all this obfuscation and prevarication and deception,” Pell told Australia’s Royal Commission into Institutional Responses to Child Sexual Abuse in 2016.
He was made archbishop of Sydney in 2001 and cardinal in 2003 by John Paul II.

Outspoken on abortion and contraception

As Australia’s highest-ranking Catholic official, Pell has been outspoken about his views against same-sex marriage, abortion and contraception.
“We shall have to struggle peacefully and democratically and cooperatively to ensure that our hospitals cannot be forced to offer abortion and euthanasia,” he told the Fota VIII International Liturgy Conference in Cork, Ireland, in 2015.
At that same conference, Pell said that Western society is abandoning many of its Christian legal foundations by passing same-sex marriage laws.
The Australian government awarded him the Centenary Medal for his service to the Australian community in 2003.
In 2005, Pell was made Companion of the Order of Australia in the Queen’s Birthday Honours, “for service to the Catholic Church in Australia and internationally, to raising debate on matters of an ethical and spiritual nature, to education, and to social justice.”
Perhaps his greatest honor came in 2014 when Pope Francis handpicked him to serve as treasurer of the Vatican and one of nine advisers on the Council of Cardinals to the Pope.
The cardinal’s three years as prefect of the Secretariat for the Economy have created upheaval at the Vatican as his attempts at financial transparency and reform have met with old-guard resistance.
In 2016, Pell attempted to bring in the outside auditing team of Price Waterhouse Cooper to examine the Vatican’s financial records, but the powerful Secretariat of State communicated to Vatican offices that it did not need to cooperate with the audit.

‘Innocent of the charges’

During his time in Rome, Pell has been called to give evidence three times before Australia’s Royal Commission into Institutional Responses to Child Sexual Abuse (in March and August 2014 and February/March 2016) regarding his knowledge of and his role in handling Catholic Church sex abuse cases in Australia.
The commission’s final report is due in December. 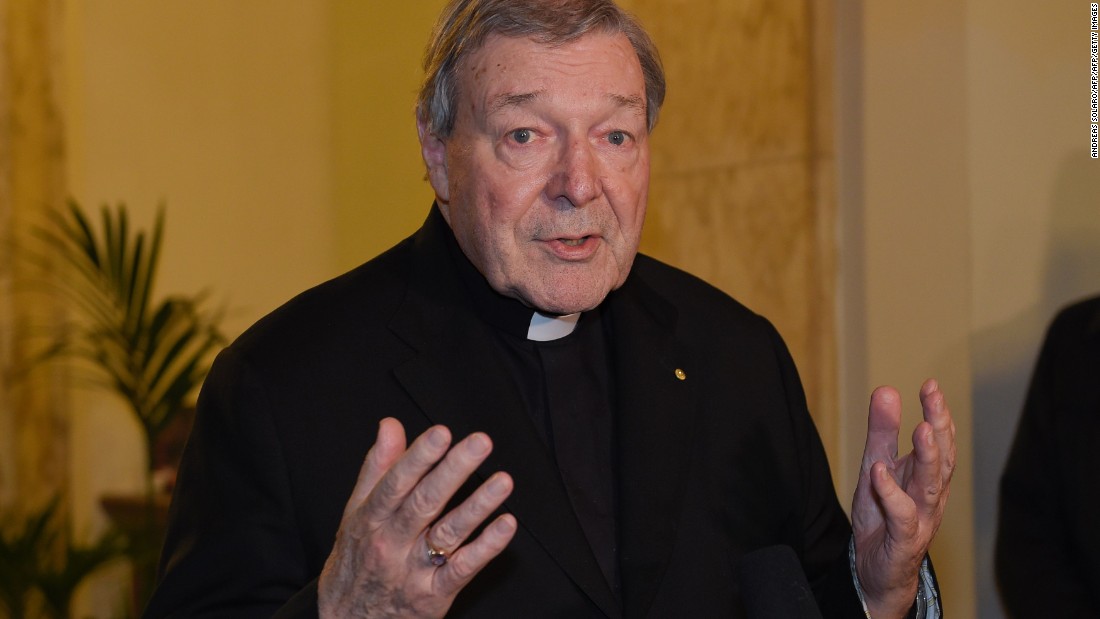 Pell: There has been character assassination

While denying any personal responsibility for cover-up of sexual abuse, Pell acknowledged, “The church … in Australia has mucked things up, has let people down. The church has made enormous mistakes and is working to remedy those.”
In October, three Victoria police officers flew to Rome to question Pell about allegations of sexual abuses lodged against him.
On June 29, Victoria police announced that Pell was charged with multiple historical sexual assault offenses. They did not provide details of the offenses.
From the Vatican, Pell said he was “innocent of the charges.”
“The whole idea of sexual abuse is abhorrent to me,” he said, adding that Pope Francis had been kept “regularly informed” and was granting him a leave of absence to return to Australia to defend himself.